signs of being outside 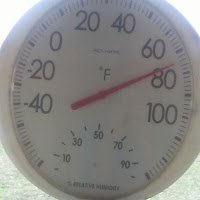 Well, this is just a picture proving that I was outside today. I had to stand up to take this picture because for whatever reason, when I was in the chair, the numbers on the thermometer didn’t show-up very readable. As you can see, it says that it’s almost 75 degrees, but since it’s cloudy and slightly windy, it certainly doesn’t feel that warm, especially in a short sleeve shirt and pajama bottoms. 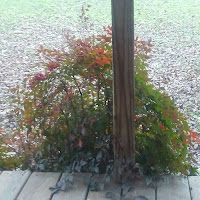 This is yet another picture taken while I was sitting on the front porch drinking a cuppa coffee. Ya know, I should really try to find out what kind of bush this is, but since the only reason that I need to know it is so I can tell people in the blogosphere, I don’t worry about it. 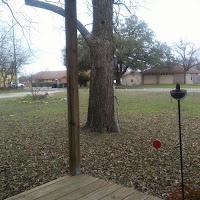 This is sort of my front yard (to the right of the tree). I believe that is a pecan tree. It doesn’t drop many pecans. What it mostly drops is dead branches in the summer, and leaves in the fall. I have been told that all I need to do to have it start growing pecans, is to feed it. But you know what, that doesn’t seem important to me.
Posted by Todd at 12:01 PM No comments:

Wasn’t going to write until I had been up for longer, then thought that I don’t have to share this with the world anyway, so might as well do it now. I thought I was sleeping pretty well, until my cheek and gums started to feel irritated by the current mouth guard I’m using. I tried for a couple of hours to relax, but after a while, I realized I couldn’t relax enough to get back to sleep. And this was after getting up and taking the 8 o’clock dose of Carbatrol. Anyway, I will be going to Walgreen's later and getting the brand of mouth guard that the dentist recommended last year, that seemed to work pretty well. Then to make me feel even worse, after I took the fucking mouth guard out and slammed the drawer closed with it in there, I had another TN attack. Granted it didn’t last long, but when you’re already not feeling well, and you’re not expecting it, I think the pain seems worse. I am up now and have taken one of the Naproxen (Aleve) tablets that the dentist prescribed for pain, as well as one of the Vimpat tablets that me neuro prescribed for TN pain. I’m hoping that the 2 combined will make the cheek and tooth/whatever pain go away, or at least be greatly diminished.

Since I’ve been up, I’ve fed the cats, cleaned their litter box, soaked up water that they splashed out of the water pan, turned my coffee pot on, and rinsed my mouth out with warm salt water. I honestly don’t know if my cheek is irritated on the inside, or if it’s strictly the Trigeminal Neuralgia making it seem that way.

I see some sunshine, so maybe this won’t be such a bad day after all. No sure what the temperature is supposed to be today, but it’s already 56 degrees Fahrenheit (13 Celsius). Hope you have an awesome day.
Posted by Todd at 10:48 AM No comments: